RxDB is not a self contained database. Instead the data is stored in an implementation of the RxStorage interface. This allows you to switch out the underlaying data layer, depending on the JavaScript environment and performance requirements. For example you can use the PouchDB storage with the SQLite adapter for a capacitor app. Or you can use the LokiJS RxStorage with the IndexedDB adapter for a browser based application. For Node.js, there are filesystem based adapters.

The LokiJS based storage is based on the LokiJS database. It has the special behavior of loading all data into memory at app start and therefore has the best performance when running operations over a small to mid sized dataset. Read more

The LokiJS based storage is based on the Dexie.js IndexedDB wrapper. It stores the data inside of a browsers IndexedDB database and has a very small bundle size. Compared to the LokiJS storage, it has a better initial load time even on big datasets. Read more

A plain in-memory storage. Really fast and can be used in all environments. Read more

The IndexedDB RxStorage is based on plain IndexedDB. This has the best performance of all other non-in-memory storage, when RxDB is used inside of a browser. Read more

The SQLite storage has the best performance when RxDB is used on Node.js, Electron, React Native, Cordova or Capacitor. Read more

The worker RxStorage is a wrapper around any other RxStorage which allows to run the storage in a WebWorker (in browsers) or a Worker Thread (in node.js). By doing so, you can take CPU load from the main process and move it into the worker's process which can improve the percieved performance of your application. Read more

On some RxStorage implementations (like IndexedDB), a huge performance improvement can be done by sharding the documents into multiple database instances. With the sharding plugin you can wrap any other RxStorage into a sharded storage. Read more

A big difference in the RxStorage implementations is the performance. In difference to a server side database, RxDB is bound to the limits of the JavaScript runtime. For example in the browser it is only possible to store data in a slow IndexedDB instead of a filesystem.

LokiJS stores all data in memory and only saves to disc occasionally (or on exit). Therefore it has a very fast read/write performance, but loading all data into memory on the first page load can take longer for big amounts of documents. Also this storage can only be used when all data fits into the memory at least once.

The Premium sharding RxStorage is only usefull when bug amounts of documents have to be stored or queries. In the CI performance test, we only insert 300 documents so that the performance actually decreases when sharding is used.

The PouchDB RxStorage is slow because it has to handle all revisions of a document on writes and queries. This makes PouchDB the only storage where it is possible to replicate with a CouchDB compatible endpoint.

Many storages run lazy, so it makes no sense to compare the time which is required to create a database with collections. Instead we measure the time-to-first-insert which is the whole timespan from database creation until the first single document write is done. 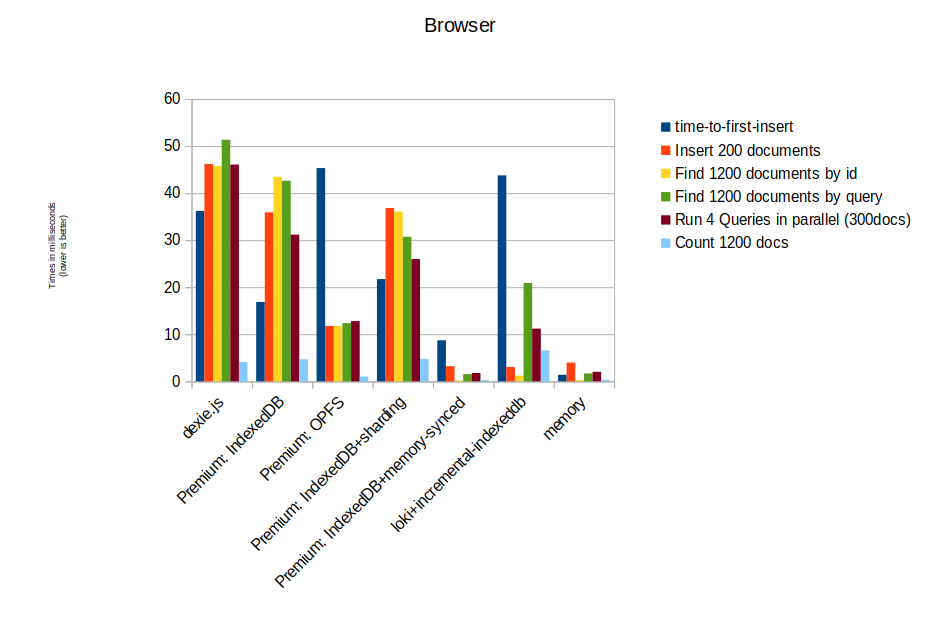 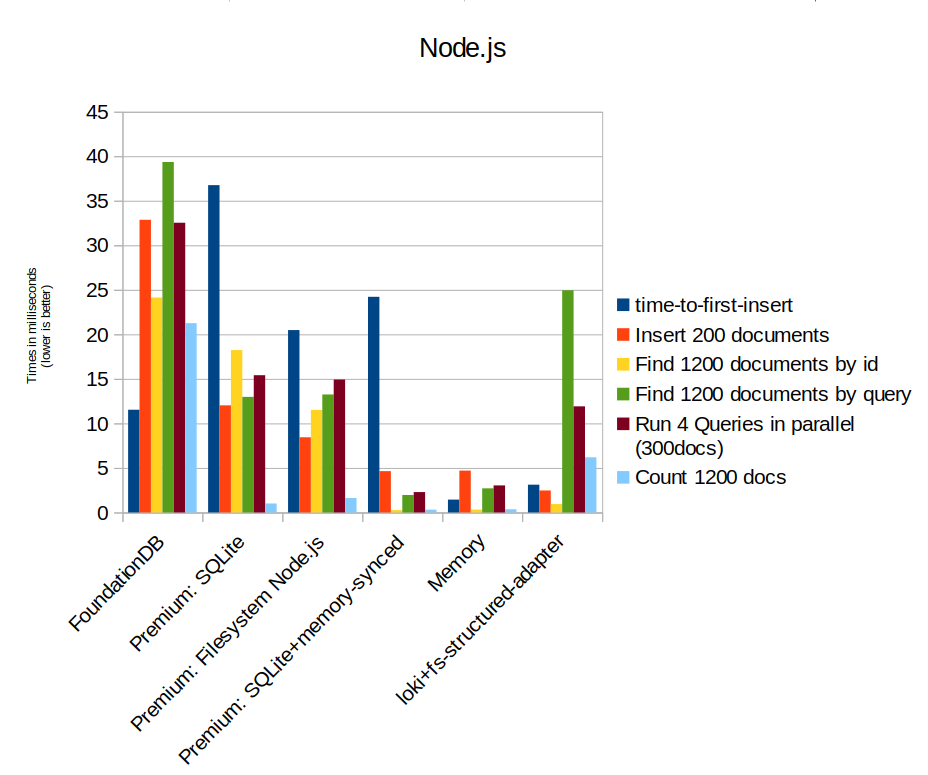 If you are new to RxDB, you should continue here